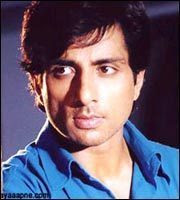 While watching Jodhaa Akbar a week back, I just kept thinking what his name would be. He has attractive eyes and sharp features that make you not want to take off your eyes from the screen when he's on there. I couldn't know his name at the end of the film as the theater folks stopped the film when the credits started. That's the man who plays Sujamal, Jodhaa's brother in the film. I just found out that he's not one of the Babbars as I thought him to be. Yup, I seriously thought he was related to Raj Babbar, but turns out he isn't related to him at all and his name is actually Sonu Sood.

Speaking of his role in JA, I think he really did justice to it and made an impact. The movie would have lacked something good if he weren't there. Of course he is very handsome, IMO, but can't be compared with the Greek-God-looks of Hrithik Roshan.

In any case, I think even his voice sounds so similar to Raj Babbar's and so do his expressions. But I think Sonu has a bit of cuteness to his face, which Raj Babbar lacks severely. I was disappointed (kind of) to know he isn't a Babbar. It's funny I looked at Arya Babbar's pictures today as well and realized he doesn't look anything like Raj Babbar, but Sonu looks a lot more like him. Funny how people look like others without being related to them. Reminds me of Sameer (DCH) "mere khayaal se har kisi ki soorat kisi na kisi se to milti hi hai".

Check out the similarities in their features in the photos below:

I thought Sonu Sood was the weakest link in the entire film !! ..

I agree with Soham.
You have quite unique liking. Need not to say, no-competion.

ah yes, there are a lot of similarities bet'n the two and I had quite a discussion wid my friends some time back.

Yeah but one difference.

Babbar always looks like a psycho to me at some (or is it many??) levels.

Soham, how can you say that? Akbar would have been killed if it weren't for Sujamal.

Jaydip, why thank you! that's more like it. :D

Wanderingmind, exactly same thing. I also had discussion about this topic with a couple of friends. And funnily enough, one of them seriously thought that Sonu Sood was actually Arya Babbar. So I'm not the only one. :P

Stupidosaur, ok now to someone who lives in a Jurassic era, this is not surprising. :P only kidding ;) but I do agree with you. At the same time, I have to admit that I've liked Raj Babbar more than some of his contemporaries for the very fact that he can and has acted well in some of those creepy weird artsy kind of movies.

Btw, for those who can read Gujarati, check out this funny article Jodhaa Akbar on "Budhvaar Ni Bapore" (Gujarat Samachar) by Ashok Dave. Oh I think he's mean to say that when Sonu Sood and Aishwarya are standing next to eachother it makes him wonder which one is Jodhaa. GRRR! X-( Rest of the article is as always H I L A R I O U S!

Apart from that, regarding Jodhaa Akbar I read here that "If this is how Jodhaa and Akbar looked, Jehangir must be the most beautiful mughal baby!" Hahahaha!

He reminds me of young Amitabh!

Beth, yup, I do see the similarities. 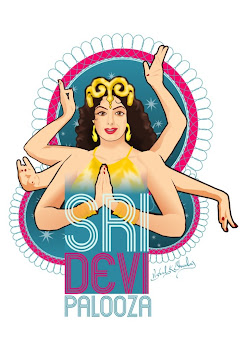